With decorative overlay and a functional design, this freestanding mirror will be at home in any room.

A full-length mirror really completes the look of any room. Aside from its practical purpose, it's also a nice, decorative accessory. And what I find appealing is how a mirror gives the illusion of more space in a room.

One of the things I really like about this mirror is the way it appears to "float" within the frame. What I mean is it sits up off the backing board and has a consistent reveal around all four sides. Even the frame looks like it's suspended off the floor because it sits on short, hidden feet. Small blocks at the top of the frame space the mirror away from the wall. And since it's not fastened to the wall, you can easily move it anywhere in your home.

You can build this project to suit your decor by selecting a wood to match your furniture and then choosing a contrasting wood for the filler strips. I used cherry with walnut fillers.

The techniques used to build this mirror are very straightforward. The hardwood frame is mortise and tenon construction with a rabbeted recess for the mirror. The great-looking overlay is really just a series of thin strips of contrasting woods applied directly to the face of the frame, as shown on the next page. I'll show you a technique for gluing up the pieces to get an "inlaid" look without all the hassle normally associated with intricate inlay work. It's what makes this mirror "stand out" from the crowd.

Wall blocks space the frame away from the wall

The frame is constructed with mortise and tenon joinery, providing plenty of strength to hold the mirror assembly

Back is fastened to the frame with screws ^j»

Back is fastened to the frame with screws ^j»

Side view shows how the backing assembly fits into the rabbet in the frame.

As I said earlier, the mirror frame is built using straightforward mortise and tenon construction. The decorative details are all applied after it's completed. Even the rabbet that holds the back is cut after the frame is assembled.

STOCK PREPARATION. You can begin by selecting and milling your stock for the rails and stiles to make the frame. 1 find it best to take the time here to make sure the stock is perfectly straight and flat. It's easier to mount the mirror on a flat surface. You'll want the backing board for the minor to fit in the rabbet on the back of the frame without gaps, so look for flat plywood, too.

Now you can rip the rails and stiles to their final width and cut them to length. Then you can begin working on the joinery.

MAKE THE MORTISES. The mirror and its backing are pretty heavy, so I chose to use mortise and tenon joints for the frame. They provide more than enough strength to hold the weight of the mirror and the plywood backing assembly.

When making mortise and tenon joints, I like to cut the mortises first. The reason is it's much easier to "tweak" a tenon to fit a mortise than to adjust the fit of the mortise to match the tenon.

The mortises in the stiles are all V4'1 wide. I took extra care to center them on the thickness of the stiles. To make the mortises, you can drill overlapping IV'-dia. holes with a brad point bit and then clean up the sides with a sharp chisel.

CUT THE TENONS, The next step in building the frame is to cut tenons on the two rails, as shown in detail 'a.' To do this, I used a dado blade in my table saw and an auxiliary fence on my miter gauge to support the workpiece. To keep the tenon centered on the workpiece, I cut one cheek then flipped it over to cut the other cheek. Just sneak

NOTE: Rabbet on back of frame is routed after frame is glued up

NOTE: Mortises are centered on thickness of stiles

NOTE: Rabbet on back of frame is routed after frame is glued up

NOTE: Mortises are centered on thickness of stiles

NOTE: Plywood back is attached with screws for easy removal

NOTE: Plywood back is attached with screws for easy removal

Use carpet tape on blocks to hold frame

Use sharp chisel to square up the corners

up on the size of the tenon until you get a snug fit in the mortise.

assembly. With the joiner)' complete, you can move on and begin assembling the frame. 1 like to do a dry fit first, to make sure everything is square and tight, and to decide on a clamping strategy.

I also lay out my clamps and open them to the right width. When you've got every tiling glued up and clamped, make sure the assembly is square by comparing the two diagonal measurements.

rabbet the frame. After the glue dries, you're ready to cut the rabbet in the back of the frame. As you can see in detail 'b' on the opposite page, the rabbet holds the plywood back and the hardboard backing board. The box below shows an easy technique for making the rabbet using a router.

install the backing. The mirror for this project will be pretty heavy so you'll want a solid backing for it. I laminated a slightly narrower V4" hardboard to a V4" plywood back to provide a rigid foundation for the mirror. You just center the hard-board on the plywood and glue it in place. Instead of clamping, 1 just

The rabbeted recess in the back of the frame holds the mirror backing assembly. The easiest way to form the recess is with a router and a rabbet bit,

SECURE THE FRAME. I started by securing blocks to the work bench and carpet taping the blocks to the frame. This raises it off the bench and provides clearance for the bearing that guides the bit.

MAKE MULTIPLE PASSES. For a smooth rabbet, I routed if in two passes. It's important to move in a clockwise direction around the inside of the frame to avoid backrouting. I began by setting the bit to

a depth of W for the first cut. Then, I lowered the bit to the final depth of %" as you can see in detail 'a' below, and made a second pass around the frame.

With the rabbet cut to the final depth, I cleaned up the rounded corners with a sharp chisel to square them up.

put the two pieces on the bench and weighted them down, using a few boards as cauls. It's best to glue-up this backing assembly be* fore installing it into the frame to make it easier to clean up any glue squeeze-out. Finally, you'll want to double-check the fit of the assembly in the rabbeted frame before attaching it with screws. With the frame complete, you're ready to move on to making the overlay.

The real appeal of this mirror is the visual impact of the overlay details. Although it looks like the frame is inlaid with contrasting woods, it's really just thin pieces glued to the front of the frame. Actually, assembling it this way is kind of like putting together a jig saw puzzle. But the nice thing is, all the pieces have square edges.

Before getting started, I want to point out there are two different thicknesses you'll be using for the overlay pieces. The outside pieces are V4" thick. For the contrasting wood that makes up the filler pieces you'll be using stock that's only V thick. This creates shadow lines and depth for a nice effect.

Is your home bursting at the seams with stuff? Is every closet crammed so full that any one of them is a death trap waiting to be opened? Has it been years since the last time you parked the car in the garage? Never fear, help is on the way. You need to get rid of some of that stuff. Dont you dare call it junk. Remember, one man or womans trash is another ones treasure! 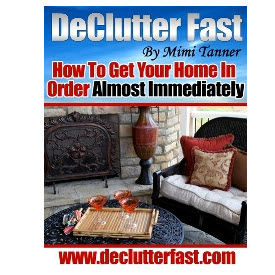 How to Get Your Home in Order Almost Immediately